A Younger Theatre (5 stars)
Augmented is a beautifully conceived piece that acts as a rallying call, championing good accessible theatre and the benefits of cochlear implant surgery. A must see, whatever your background.

“Sophie Woolley is objectively, thoroughly, and undoubtedly hilarious. Her comedy is unassuming, astute, and Augmented is oozing with the kind of authentic, gritty observational humour that we Brits are so proud of.”

“Leading the audience through a tragicomic day in the life of a bickering couple, set to the backdrop of a riot in a near future Westfield Shopping Centre, Sophie Woolley paints a scene of ennui turned to carnage. Holding the attention of an audience can be a tricky feat when performing a monologue, but Woolley excels as a solo act. The story unfurls as she rolls through each scene, her character getting more and more agitated, until it explodes into a unforeseen climax.”

“…there are many fine lines for the actors to speak, as well as some useful facts about climate change to drop into dinner-party conversation” The Times

“Cyclist and eco-warrior Will finds an eager new convert, ex-banker Tabitha, in Sophie Woolley’s entertaining play about the farcical lengths to which some of us will go to further the green cause.  Featuring a lovely performance by Doon Mackichan as Tabitha.” The Observer

“…smart observations on the selfishness of characters of her social standing versus the morally smug status of eco-activists make this a very different listen.” Radio Times

“Charming and Witty” The Stage

Mail on Sunday Pick of the week 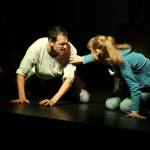 ” a delightfully skewered snapshot of life outside a west London kebab shop….Morgan Large’s set is a treat, hosting some of theatre’s most inventive captions (meant for deaf audience members, but I found myself frequently reading them, they were so entertaining), part-animated and fully integrated into Woolley’s white-knuckle ride.”

“‘It is fast paced, funny and ridiculously energetic…This production uses an open caption technique with three overhead projectors which fire out words and animations in time with the performers’ delivery…And while this obviously benefits deaf audience members, it allows everyone in the audience the chance to better appreciate the wonderful manglings of the language that many of the characters employ…” The Guardian

“Over the night, arguments ensue between strangers, a kaleidoscope of characters brilliantly drawn by Woolley. The performances in ‘Fight Face’ are superlative. Sophie Woolley and David Rubin morph between characters with such expertise I had to remind myself that this was a cast of only two people.” Curses and Riots

One person show written by and starring Sophie. When to Run premiered at Edinburgh Fringe and toured UK 2006-2008 with sell out runs at Southban Centre Purcell Room, Soho Theatre and studio Royal Exchange Manchester.

“Her use of different voices is astonishing.” Blake Morrison

“…a wonderful creation.” The Scotsman

It’s disappointingly rare to encounter a show which makes you laugh out loud throughout. This is one of those successful rarities. Woolley’s solid comic writing and quick changes between her four characters, is a tour de force in effortless timing. Here, her wit is multi layered, subtle and deeply incisive. It’s impossible not to be moved even as you laugh at the antics of the lazy dog walker, the blonde narcissist, the self help guru. An immensely talented woman, one of the best comedy performances you’ll see this year. This is no endurance test, but a fantastic adrenaline rush of a show, with the audience as the most decisive winners. Sara-Mae Tuson UKTheatre Reviews July 2007 *****

Review by Lynne Walker, The Independent May 2008